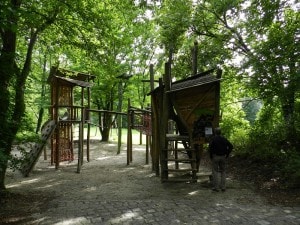 Untergiesing is the “lion” district. Of course, this does not mean wildcats running around free, it is about the soccer club TSV 1860 Munich. The traditional center of the district is the Grunwald Stadium. For many years, the area was a working-class neighborhood with quite affordable housing.  Recent years have brought significant changes to the status of Untergiesing. The green landscape of the Auen of the Isar River is a beautiful recreational area, a favorite of many residents.

The very first thing that comes to mind when talking about Giesing is the soccer club 1860 Munich. The most devoted fans of this club would subscribe to this statement, although the club was founded in the Glockenbach district. Untergiesing is considered the home ground because of the stadium in Grunwaldstrasse, where 1860 München celebrated their finest hour on 28.5.1966: they beat the Hamburg club 1:1 in the German championship for the first and only time to this day.  What not everyone knows: The not-so-popular 1860 Munich rival club Bayern Munich also played their European Cup games here in the Grünwalderstrasse stadium until 1972.

The stadium was built in 1911 and during its existence has been repeatedly rebuilt and renovated. To this day it is the third largest soccer stadium in the Bavarian capital. The club 1860 Munich played games here until 28.5.2005, before moving performances to the field of the Allianz Arena.

In contrast to the Obergiesing district, Untergiesing boasts wonderful recreational facilities. This applies especially to the banks of the Isar, which form a “green belt” by the water with pebble beaches and picnic spots. Along the picturesque Toitoburger Street, it’s nice to take a walk at any time of the day; it’s a paradise for gardeners and vegetable growers who like to work in their gardens in their spare time.  The Rosengarten (rose garden), tucked between the Isar promenade and the Schierenbad basin, is also worth mentioning, as a walk through this garden is always relaxing and inspiring.

Everywhere in the Untergiesing there are traces of the past: dense blocks of workers’ houses from the early 20th century, former workers’ lodgings (on Pilgersheimer, for example), beautiful old houses on Mondstrasse along the Auer Mühlbach (Mill Stream).  However, there are also many modern blocks of flats, especially along the main streets of Obergiesing, which were built after 1945.

Changes are taking place in the neighborhood all the time. The close proximity to the city center and the well-developed public transportation network have turned the former workers’ quarter into a highly sought-after residential neighborhood. More affluent residents have taken an interest in the area through expensive refurbishment and modernization of the old buildings; the former workers’ settlements are becoming trendy. Also small entrepreneurs are increasingly interested in the area: Architectural offices and decorators’ offices have been opened in Schierenstrasse. On the streets of Untergiesing there are still iconic cafés, snack bars and restaurants, especially on Sommerstrasse. 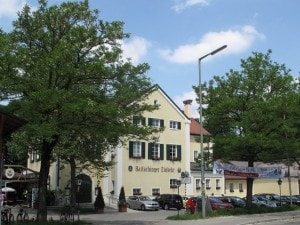 Harlaching is one of Munich’s most aristocratic and tranquil residential areas. Situated directly on the banks of the Isar, Harlaching attracts nature lovers: the famous Hellabrunn Zoo and the training grounds of the Bayern Munich soccer club are located here.

Harlaching, like Talkirchen on the opposite side of the Isar, is an area of verdant coastal meadows and parkland. The Isar’s coastline invites you to take relaxing strolls to regain your energy lost in the hustle and bustle of the day.

One of the most famous landmarks of Harlachting is the small pilgrimage church of St. Anne, beautifully situated on the Harlachinger mountain and still one of the most beautiful sacral buildings in Munich, its history dates back to the 12th century. Not to be missed is the Maria Cell, a small chapel at the foot of the Isar hill, which can only be reached by serpentine road or by the Maria Cell Bridge. A much more modern, but no less important landmark is the Emmaus Lutheran Church built in 1964 on Laurin Square, its pointed dome visible from afar.

The Menterschweige is also not far from the Isar, one of Munich’s favorite and most traditional inns. In the summertime the beer garden and inn attracts many tourists. Nearby, according to legend, you will find the house of Lola Montes, the infamous lover of King Ludwig I, where she found refuge after fleeing in 1848. This fact is undocumented, but the house and the large garden nevertheless attract a large number of visitors.

The block of aristocratic villas on the banks of the Isar has always been an exquisite place. Unfortunately, it underwent destruction during the Second World War, but the losses caused by the war were repaired continuously and the colony of villas on the high bank of the Isar has been preserved in full splendor.

The greatest recreational value in Harlahing is without doubt the meadows of the Izar, in all weathers a walk on the shore, a sports jog or a bike ride is a great opportunity to gain strength and good spirits.