Trudering is a multifaceted neighborhood that combines several styles and trends: for a long time it was known as a “garden neighborhood”, comfortable for families with children, neighborhoods with typical Bavarian country houses, neighborhoods of expensive villas, modern city neighborhoods and beautiful quiet park areas can be found here. The “face” of the neighborhood changes quite quickly, what stays the same is the demand and prestige of the area.

In many parts of Trudering there are still traces of the old village, especially in Empelstrasse, where you can see one or the other village house, and in Kirchtruderinger Strasse there are still remnants of earlier settlements.  Nevertheless, Trudering also has an urban flair, which is especially noticeable in the fairgrounds, where thousands of people from different countries and continents visit every day.

The area is full of one- to two-family houses and rich people’s villas, of which there are especially many in the Waldtrudering, which combines the beautiful recreational suburban area of south-east Munich with the prestigious villa quarter, whose construction dates back to the first half of the 19th century. Statistics of the city of Munich show that 15% of the families living in this part of town have a net monthly income of €7,500. Rich people, noble families, entrepreneurs and businessmen can afford to live in this part of town.

In recent decades, high-rise buildings have been built in the area, particularly in Bayuwarenstrasse, to meet the ever-increasing demand for housing.

Housing prices in Trudering have more or less stabilized. The construction boom of recent years has lowered the prices charged by the owners of old buildings, but it has also changed the appearance of the neighborhood: Again and again, undeveloped lots and former front gardens are being built up with two-family houses or small apartment buildings. Old residents long for the former days when the district was greener and the “Greening Association” of the city of Munich is vehemently opposed to the further building up of gardens and small parks.

In Trudering there are plenty of stores for every taste and purse, cafes, restaurants, sports fields, kindergartens and schools. The S 8 and S 9 train lines and the U 2 subway line provide a quick and convenient way to get to Munich city center or to the outskirts of the city. 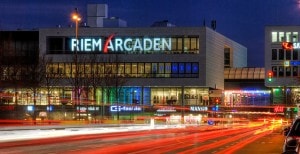 This modern, up-to-date neighborhood in the east of Munich has become one of the favorite places to live in the last 20 years.  If anyone thinks it’s just an exhibition grounds, they’re dead wrong. The Riem area has a lot to offer: the Hippodrom, the Hofbräuhaus, Riemer Park, the huge Riem-Arcade shopping mall and the reloading station.

Since the closing of Munich’s Riem International Airport in 1992, the city quarter has breathed a sigh of relief. Gradually the noise and ugly airport buildings disappeared. A new fair city with 550 ha of living space was taking their place. Above all, families with children flocked to the city.

Today about 111 nationalities live in Rieme, so there are some problems from time to time, but the area is constantly being improved to meet the requirements of a modern cosmopolitan city.

The Riem neighborhood is known primarily for its fairgrounds. In the mid-90s, the New Munich Trade Fair was built in the northern part of the old airport. Every year it attracts over 2 million visitors from all over the world.

Idyllic is the western part of the area, between the old Flughafentover and the subway station Exhibition City, where Lake Messersee spreads out. Visitors to the fairgrounds, store joggers, and neighborhood residents like to stroll along the lakeshore in their free time. From here you get a good view of the bustling life of the Riem neighborhood.