Pasing is probably the most dynamic of Munich’s western districts. Life around the Main Station boils day and night. Architecturally, the buildings of the district are in the style of the Gründerzeit period. 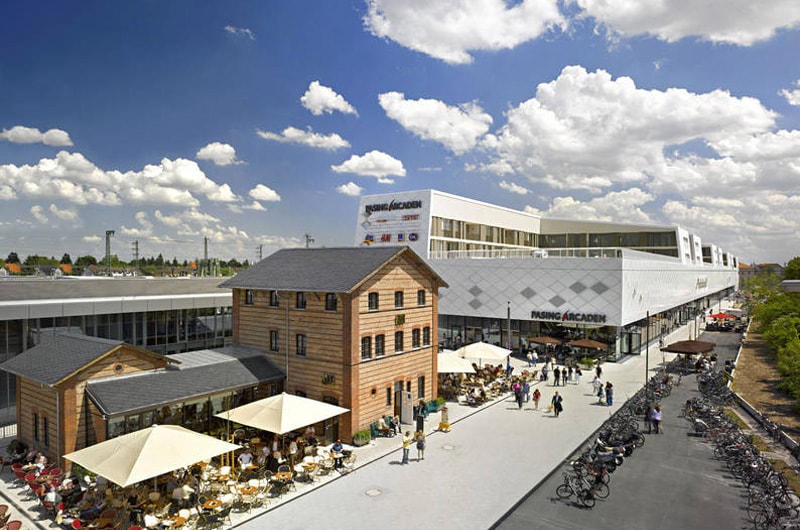 Pasing is the lively western center of the Bavarian state capital, around Marienplatz square and the Pasing train station there are many commercial enterprises. The district has its own town hall and the railway station is the most important transport hub in the west of the city.

Pasing was and still is today a center with a variety of stores, medical, social and school facilities. The Pasinger Fabrik with its theater venues, concerts and exhibitions belongs to the distinctive cultural life of the district. The most important industrial areas stretch north and south along the railroad.

The architectural style of the Marienplatz in Pasing and the villa district north of the railroad are fine examples of the Gründerzeit period.  The rest is dominated by high-rise houses, which emerged primarily after World War II.  More recently, more and more single-family homes have been built.

Pasinga’s extensive park is a great place to recharge after a day at work, spend a weekend with the family, and enjoy the freshness of nature on a warm day.

In Pasinga the train station has been reconstructed and the Pasinga Arkaden shopping center opened. In the near future there could even be a pedestrian zone. The west of Munich is being beautified. What is also new is that more and more students are seen in the “family” part of town. They are looking for small rental properties on the outskirts. This leads to higher prices. It is now hardly possible to rent a flat in a new building for less than 11.50 EUR/m2 but many landlords offer prices as low as 14 EUR/m2.

Available vacant land in the area is being planned and developed all the time. Old houses in Obermensing are being rebuilt to make way for modern multi-family ensembles. Housing is now appearing along Landsberger Strasse. Previously, Munich residents couldn’t imagine living in this neighborhood. Today, thousands of cars drive along the four-lane road in a day. At the end of the year, when the new northern bypass is completed, the part between Knee and Pasinger Marienplatz will become a green space for strollers, barred from traffic.  The future tranquility of the neighborhood is already driving up prices. For a new single-family home they are asking up to 7,500 euros per square meter.

Plans are underway to redevelop the former industrial estate on Paul-Gerhard-Allee: About 2,000 new apartments are to be built here. In addition, an elementary school and a park are planned.