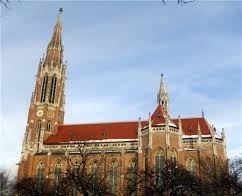 Giesing has long been a symbol for Munich’s working class. Since then there has been a division of the district into Obergiesing and Untergiesing.

Today Obergiesing is a popular and sought-after residential area. The majestic Church of the Holy Cross on Giesing Mountain is located here. Up until the 1990s, barracks for American soldiers were located here, which left a definite mark on the history of the neighborhood.

Giesing is older than Munich, its foundation dates back to 790, in the historical documents of that time it is mentioned as a settlement of “Kiesing”. For centuries the settlement consisted of farms, by 1812 there were already 18 of them. Five years later, in 1817, the East Cemetery was founded. The settlement became a part of Munich city in 1854.

The Obergiesing housing style is varied: small one- to two-family houses in quiet quarters alternate with large residential blocks on Tegernsee Street.

For a long time the area was considered a working-class settlement, but more and more families with children are trying to buy housing in Obergiesing. The proximity to the center of Munich and the low cost of living compared to other Munich districts make Obergiesing a very popular place to live.

One of the most famous residential neighborhoods in Obergiesing is the Fasangarten. Originally the place was a pheasant hunting ground, of which today only the forester’s house reminds. Interestingly, this park did not become part of the Obergising district until 1937, but was never part of the historic village of Giesing.

Two cemeteries are located in Obergising: the cemetery at Perlacher Forst where numerous victims of the Nazis are buried, among them members of the resistance group White Rose Sophie and Hans Scholl, Christoph Probst; in the Eastern Cemetery the first thing that attracts attention is a monumental domed structure, a monument placed at the burial site of Kurt Eisner, first Minister-President of the Free Republic of Bavaria, killed in 1919.

Probably the most beautiful building in the Obergiesing district is the Church of the Holy Cross, which stands on Mount Giesing and is therefore clearly visible throughout the district. The district’s inhabitants have every reason to be proud of it: the Holy Cross Church is the only Neo-Gothic church in Munich that is completely intact.  The Church of the Holy Angels on Weissensee Street is almost a contrast to the neo-Gothic grandeur. The wooden panelling and tall windows make a strong impression on all who see this architectural marvel for the first time.

And not far from the East Cemetery you can see the Church of St. Mary, Mistress of Peace, built in the Constructivist style with well-observable elements of Pseudo-Romanesque style. It is under the protection of the state.

Another interesting fact of life in the Obergiesing district is the birthplace of Franz Beckenbauer, “Kaiser Franz” as he is proudly called by German soccer fans, one of the most famous footballers in the history of Bavaria.