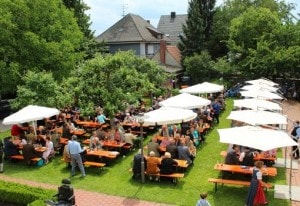 Although high-rise residential blocks dominate the modern picture of the Hadern district, there are still indications here and there that there used to be a village here. Walking around Heighelhof street you’ll come across a lot of houses built in the style of the village’s inns and which still retain their village flair.

Hadern doesn’t hold any amazing buildings, but if you stay a bit longer you’ll discover some special sights, such as St. Peter’s Church, which is characteristic of a neighborhood that has maintained and nurtured its style. In the church you can see statues of St. Peter and St. Paul in the late Gothic style.  The church of St. Canisius is no less interesting. Although it was built in the early 20th century, the Gothic and Baroque architectural features are impeccable.

The largest German soldier cemetery is located in the Hadern district. Some 3,520 German soldiers who died during World Wars I and II are buried here.

Tischlerstrasse separates the Soldiers’ Cemetery from the Waldfriedhof Cemetery, which covers an area of 170 hectares. The cemetery was founded in 1907 and was the world’s first burial place located in the forest.  It is divided into sections, each with its own special atmosphere. Famous people who have passed away here include the writer Frank Wedekind and the resistance fighter Kurt Huber. The old cemetery has a sombre, romantic beauty, with beautiful tombstones hidden in the shade of its old trees.

The outlying blocks of the Hadern neighborhood, especially in the southern part, are built up with small single-family homes, which was very typical of the area between the wars. After World War II, high-rise residential neighborhoods were built where gravel processing plants and agricultural establishments had previously been located: in part of Kleinhadern, on Senftenauer Street, in Blumenau, west of Silberdistel and Waldwiesen Street, north of Greffelfinger Street.

The settlement of Neuhadern, where the Augustinium Clinic is located, was also established after World War II. The area is divided by the A 96 Munich-Lindau freeway through Kleinhadern and Blumenau.